It is time for a FIRST Wild Card Tour book review! If you wish to join the FIRST blog alliance, just click the button. We are a group of reviewers who tour Christian books. A Wild Card post includes a brief bio of the author and a full chapter from each book toured. The reason it is called a FIRST Wild Card Tour is that you never know if the book will be fiction, non~fiction, for young, or for old…or for somewhere in between! Enjoy your free peek into the book!

You never know when I might play a wild card on you!

Today’s Wild Card author is:
Mykah Montgomery
and the book:
The Little Girl Who Wanted a Tail
XLIBRIS (September 20, 2012))
***Special thanks to Mykah Montgomery for sending me a review copy.***
ABOUT THE AUTHOR:

Mykah Montgomery is the CEO of Mylaan Entertainment. She is an author, songwriter, producer, actress, filmmaker, and member of Delta Sigma Theta Sorority, Incorporated. She currently resides in Oakland, CA.

She carries forward a family tradition of artistic innovation, as the granddaughter of renowned jazz pianist and vibraphonist Buddy Montgomery, and grandniece of legendary jazz guitarist Wes Montgomery and bassist Monk.

Formally with the girls group Emage, she recorded an album with PolyGram / Mercury Records In addition, she has recorded or shared the stage with Oscar winner Jamie Foxx, The Backstreet Boys, Blacksheep, and Buddy Montgomery. Mykah’s musical compositions received rave reviews in the UK and Japan, which peaked at #7 in just 2 weeks after its release. Her executive produced debut album, ME & U, can be found on ITunes, Amazon.com, or mylaanent.com.

Mykah has written two Christian themed books, the first, I Am Because She Was, is being made into a movie. The second, “The Little Girl Who Wanted A Tail, coupled with its theme song, “DIFFERENT”, was inspired by her lovely daughter Mylaan.

She loves hearing from her readers at mylaanent@yahoo.com or mykah@mylaanent.com. 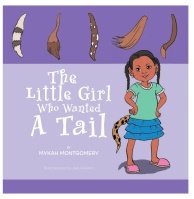 Sometimes kids feel like they can’t be real, and who they are inside, they often try to hide it. This was true for a little girl named Millicent, who learned that being different, is alright. As a matter of fact, the only things that make us the same are our differences.

With bullying and mean behavior running rampant in our communities, it is important that our children are taught a code of conduct that promotes love, acceptance, and respect for themselves and others.

AND NOW…THE FIRST PAGES (Click on pictures to enlarge): 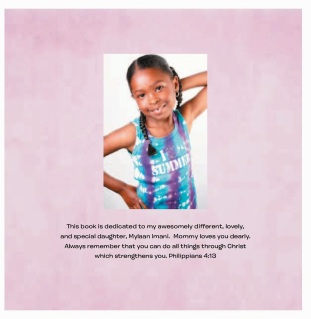 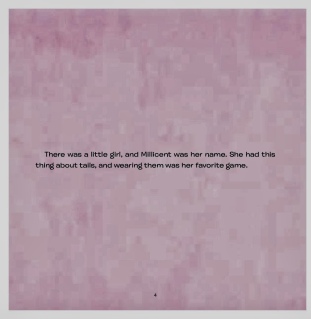 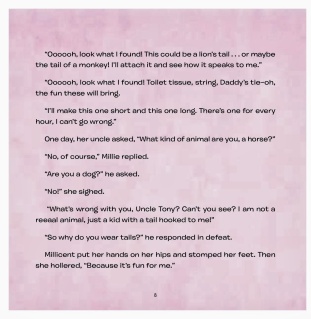 Paulette Harper is an award-winning and best-selling author. She is the owner of Write Now Literary Virtual Book Tours and is passionate about helping authors succeed in publishing and marketing their books. Paulette has been writing and publishing books since 2008. Paulette is the author of That Was Then, This is Now, Completely Whole and The Sanctuary. Her articles have appeared on-line and in print.

It is time for a FIRST Wild Card Tour book review! If you wish to join the FIRST blog alliance, just click the button. We are a group of reviewers who tour Christian books. A Wild Card post includes a brief bio of the author and a full chapter from each book toured. The reason it is called a FIRST Wild Card Tour is that you never know if the book will be fiction, non~fiction, for young, or for old…or for somewhere in between! Enjoy your free peek into the book!

You never know when I might play a wild card on you!

Today’s Wild Card author is:
Bill Myers
and the book:
The Machine
B&H Kids (September 1, 2013)
***Special thanks to Rick Roberson for sending me a review copy.***
ABOUT THE AUTHOR:

Bill Myers is an accomplished writer and film director whose work has won more than sixty national and international awards including the C. S. Lewis Honor Award. Among his best-selling
releases for kids are The Incredible Worlds of Wally McDoogle and The Forbidden Door. He has sold more than eight million books and videos and lives with two cats, two kids, one dog, and one
wife near Hollywood, California.

For ages 10 to 14, Truth Seekers is a fast-paced, thoughtful, and funny new series using a 21st century approach to sharing ancient Bible truths.

In book one, The Machine, twin siblings Jake and Jennifer have just lost their mother and are not thrilled about moving to Israel to stay with their seldom seen archaeologist dad. They don’t yet understand how “all things work together for good to those who love God.” But they will when a machine their father invented points them to the Truth.

It was like a dream, but not really. I mean it was a dream but there were parts that seemed so real—besides the parts where Mom had actually died in real life. Does that make sense? I get those every once in a while, dreams that are more real than real, ever since I was a kid.

Anyway, in the dream Mom was driving our SUV up the steep, winding road to our home in Malibu Canyon.

Jake and I were in the back, sitting in our clearly designated seating areas . . .

I, on the other hand, sat in the WELCOME: This is How Normal People Live Zone, complete with breathable air and a place to sit without catching some deadly disease. (Jake accuses me of being a Neat Freak. Maybe, but it’s better than being a toxic waste site.)

It was the same dream I’d had a hundred times before . . .

I was busy doing homework when I glanced up to see a monster truck coming around the corner in our lane.

“What’s that?” She reached over to turn down the radio—one of her silly Country-Western songs about some girl breaking some guy’s heart.

But she didn’t look out. And, just like all the other times, I saw the truck heading towards us, blasting its horn. I’m guessing his brakes had failed by the way he was scraping along the mountainside to slow himself. A good idea, except the mountainside was on our side!

Mom had nowhere to go. She swerved to the outer lane then tried to turn back, but she’d run out of road. We crashed through the guardrail and sailed out over the can- yon floor, which was a good two hundred feet below. There was no sound. I could see Mom screaming but heard only silence—except for that Country-Western singer going on about his broken heart.

I spun to Jake but he didn’t even glance up. He was too busy playing his stupid computer game. Then, just when the singer reached the line, Why you stompin’ on my achin’ heart with your high heel boots, we hit the water with a huge splash.

And this is where things get interesting . . .

In the real world, on the day Mom died, there was no water at the bottom of the canyon. It was September and the stream had dried up. And while we’re doing a reality check, Jake and I weren’t even in the car that day. Jake had been at the beach being Mr. Cool with a bunch of girls, and I was at home doing my algebra. (I know I’m only seventh grade, but besides being a neat freak, I’m kind of a workaholic.)

But in the dream there was plenty of water and the SUV kept sinking deeper and deeper with all three of us inside. Well, actually four, if you count the Country- Western singer who was now sitting in the front passenger seat, strumming his guitar!

Water poured in and quickly rose. Mom tried opening her door, but it wouldn’t budge. She hit it with her shoulder over and over again, but the pressure of the water outside was too much. It began swirling around our waists and rising to our chests.

“Jenny,” Mom shouted, “roll down your window!” “It’ll flood us worse!” I yelled.

“It’s the only way. Roll down your window and swim out!”

I threw a look to Jake who had conveniently disappeared. (Even in my dreams, he’s a slacker.)

I rolled down the window. More water roared in, pounding against my chest and face. I had to turn my head just to breathe. Then I grabbed the sides of the open window with my hands, turned my head away for another quick breath, and pulled myself out into the water.

I kicked and swam until I grabbed the SUV and pulled myself over to Mom’s door. By now the car was completely filled. Our faces were inches apart, separated only by her window. I yanked at the door handle. It didn’t budge. I tried again. Nothing. My lungs started aching for air, but I kept pulling and tugging as Mom kept pushing and banging.

My heart pounded in my ears. My lungs felt like they were on fire. The outside edges of my vision started going white. Mom pounded on the glass. I joined in and hit the window with my fists. When that didn’t work, I tucked in my feet, raised my legs and kicked it. Still nothing. My lungs were screaming for air. My vision grew whiter. I had to get a breath. I pointed to the surface and shouted, “I’ll be back!”

She nodded and I pushed off, my lungs ready to explode. Sparkly lights danced through my head. I was losing consciousness, I was going to pass out, I was—

Then I broke through the surface, coughing and gasping. Cool air soothed my lungs as I gulped in two, three, maybe four breaths. I forced my head to clear, then took one more breath and ducked back down into the water.

It was dark and murky but I could follow the bubbles. The SUV had settled to the bottom of the river. When I reached the roof, I pulled myself over to Mom’s side. She wasn’t moving.

I yanked at the door. I slammed it. I kicked it. I had to get her out. The door gave, ever so slightly. I pulled harder. It moved some more, then it opened with a groaning CREAK.

I grabbed Mom’s arm and pulled, but she was stuck. I spotted her seat belt and reached down to unbuckle it. My lungs were crying out for air again as I pulled her from the car. But we’d barely started before we were jerked to a stop. I turned and saw that something like a shadow had grabbed her other arm. At first I thought it was the Country-Western singer. I pulled but it held her tight. It was like a tug of war game, me on one arm, the shadow man on the other. And the harder I pulled—this was even weirder—but the harder I pulled, the more he started turning into this shadowy creature that kept growing bigger and bigger with huge, bat-like wings.

This is a dream, I kept telling myself, this is only a dream!

The pounding in my ears grew louder, filling my head . . . along with the song. That’s right, the singer or shadow or whatever it was, had begun singing again. Maybe it had never stopped:

Well, Mr. Shadow could guess again. Dream or no dream, he could not have her.

My vision was totally white now. My mind shutting down. I could no longer feel my hands or my legs. I knew I was dying, but I would not let go. I loved her too much, I would never let go. The shadow thing may have won, but—

It sounded like Jake. But that was impossible. What would Jake be doing down here? I heard him again, even louder.